ISLAND PARK, Idaho — Grassroots activists in Fremont County announced on Monday the formation of a new organization to increase and sustain wildlife in the Upper Henrys Fork watershed.

The new group, the Henrys Fork Wildlife Alliance, aims to educate and advocate on issues that impact wildlife in the Upper Henrys Fork Watershed. The Alliance is affiliated with the Idaho Wildlife Federation, the oldest and largest statewide sportsmen group dedicated to the conservation of natural resources, wildlife, and wildlife habitat.

“This watershed is a critical part of the Greater Yellowstone Ecosystem and lies within one of the last intact mountain ecosystems left on earth. We live here and are stewards of a special treasure,” said organizing committee member Jean Bjerke, a longtime homeowner in Island Park. “Residents of Island Park live here for the quality of life and wildlife is the cornerstone of our lifestyle. We need to have conversations about how we can live with wildlife, keep them healthy, and we need to have scientific data and facts guiding those conversations and policies.”

Bjerke added that HWFA is the only citizens’ organization devoted solely to working for healthy wildlife populations in the area. HFWA founding member Tim Reynolds has lived in Idaho for 45 years and enjoyed his first camping trip to Island park in 1974. He has owned a home in Island Park for 15 years. He said he was saddened to see Island Park and Fremont County become so deeply divided during the debate over wildlife overpasses last year, and said he wanted to help form the Henrys Fork Wildlife Alliance to bring people together around our love of wildlife.

“People in Island Park value wildlife,” Reynolds said. “We live with wildlife and want to do everything possible to maintain robust wildlife populations.”

Another supporter of the new group is local sportswoman JoAnn Shults, a fourth-generation Idahoan who lives in Island Park and hunts, fishes, and rides a snowmobile and four-wheeler.

“We moved here because we love the wildlife. We should protect what we love,” Shults said.

“Wildlife issues may be the last nonpartisan issues left in our country,” says Brian Brooks, executive director of the Idaho Wildlife Federation. “There is no such thing as a republican elk or a democrat mule deer. All they need is food, habitat, and the ability to get from point A to point B. Partisanship and misinformation keep us from having substantive conversations and good policy. Bringing folks together to inform decisions that keep Island Park and the Upper

Henrys Fork a great place to live, visit, and hunt is critical now. HFWA will be a uniting organization with this in mind.”

Visit us on the web at henrysforkwildlifealliance.org. 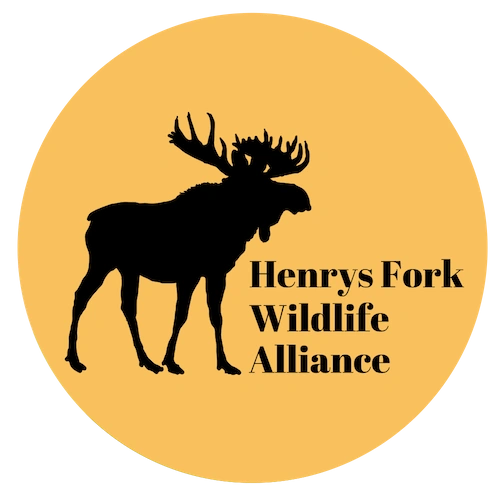